My first computer was an Olivetti, very likely an M24 SP, I don't remember very well, I was less than 10 years at the time, but it had a black/amber monochrome display, 5.25 Inch floppy drive, a MFM harddisk (I remember the sound of the head-positioning stepper motor), it ran DOS and had games, I remember 3demon, sopwith, pc-man and alley cat.

Sadly, lost this machine to time, I would very much like to acquire another one.

Nitpicking, this actually is a computer, it's got main memory, a general-purpose CPU and exchangable programs. There was even basic for it (controlling that with a joystick must have been painful though)

I got this machine before I was 10, and I fondly remember playing Phoenix on it on the TV in the living room before going to school. I still play Phoenix once in a while in Stella.

The 2600 is still with me, it's actually not the one I had first, that was lost to time, but I got another one for cheap, however, it is unreliable, and I should do some electrical debugging on it someday. 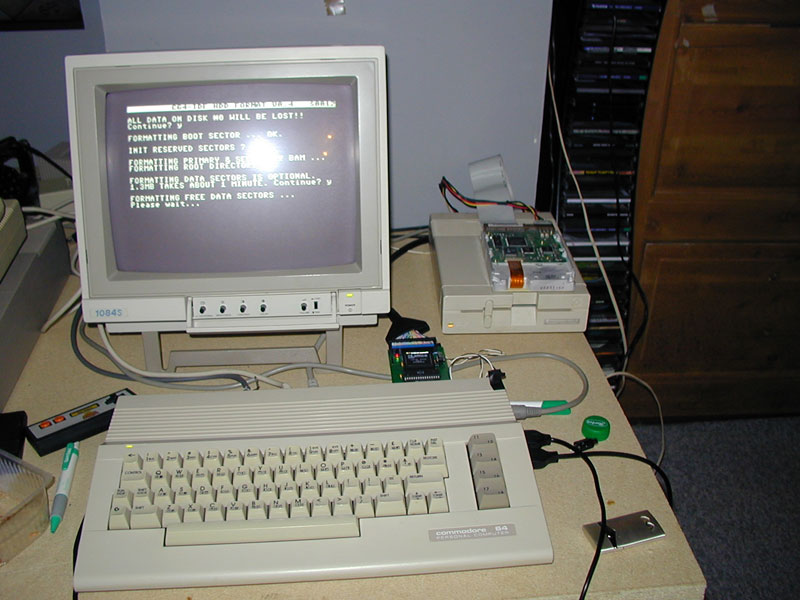 The Commodore 64 I got had a 1541 floppy drive and 1530 datasette tape drive and a Final Cartridge 3. It sadly died from a failing power supply slowly frying the SID chip before killing it completely.

I have a large collection of software and Cartridges for this machine, I also built two arcade-style joysticks with real arcade sticks for it.

Fond memories of my first modern PC, likely Christmas 1996, it was a Christmas present from a family member (thanks!!), it was a Intel Pentium 100 Mhz with 16 MiB RAM and 812 MiB (formatted) Maxtor harddisk. I soon upgraded it with a Voodoo (Voodoo Rush) 3Dfx card and a 10 Mbit network card, attended several LAN parties with this machine, it ran Quake2 with around 30 fps, which was playable enough. I can't remember exactly when I got it, but it came with Windows 95, later it ran Windows 98 rather well. I eventually upgraded with an additional 16 MiB EDO ram, which at the time were bought used and very cheap. Late in life, it served as a webserver (Apache on Windows 95) and then as an Internet router with Smoothwall (A linux firewall/router software).

I still have the motherboard and CPU for this machine.

When I was around 14, I got a respectable sum of money (some Danish religious tradition, I ensure you, I did it for the money!)

I had dreamed up a dual-cpu system (which in retrospect, was pretty uninformed as I planned on running Windows 98 on it), but was not allowed to build it as my dad didn't want to let a 14 year old kid with bad concentration mess around with hardware worth that kind of money (I've forgiven him), so we got Labtech data to come up with an offer (they where to spec it), which consisted of two 600 mhz celeron cpu's in slot1 converters.

There's a reason Pentium 3's are slot1 and Celorons aren't, one of them being that one of those CPU's support multi CPU system, and the other does not.

So yes, I got a system that didn't even boot every time, not sure what kind of testing they did, but it was crap, and I had to unplug one CPU to get it working.

In the end, I ended up trading the two celerons for one P3, and it ran very well indeed. But to this day, I've never forgiven Labtech for making me an offer consisting of incompatible hardware, and not advicing me that the OS I wanted to run didn't support multi cpu. That's extremely unprofessional. I still hope you crash and burn, Labtech.

Some time later, I traded the 550 Mhz P3 for two 500 mhz P3's and upgraded to Windows 2000, while games at the time did not do much threading, the system performed extremely well, I had also thrown some birthday money into getting a gigabyte of RAM for it. It had an ASUS V6600 Deluxe GeForce256 3D card in it and a 20 GiB harddrive. I attended many LAN's with this as well, it ran Action Quake 2 in 1280x1024 with more than 90 fps.

Eventually it became a Linux server, and then for a while, it went back to being a windows 2000 system when a friend needed a PC.

I'm not sure, but I think the motherboard died, and I threw it away.

I always build my own PC's now, and I dislike laptops for being so... well, they're always weaker and more expensive than what I can get into a big box with a powerplant next to it.

Anyway, my first build was based on an Athlon XP 3200+ as far as I recall. I believe it had 512 MiB of memory, An ATi Radeon 9700 PRO and I don't remember which kind of harddrive it had in the begining, but at some point, I got a two ide-port raid controller and 4 IBM Deskstar 60 GiB disks (in raid0 of all things), later called Deathstars, they had bad power circuits or something, I lost everything a few years later. I've been using raid6 ever since.

Two floppy drives, 640 KiB Memory, DOS from floppy, Amber monitor. I'm sometimes using this for playing the games I had on my Olivetti.

Powered on, it works, has the switchmode PSU for it. No software that I know of.

I have several cartridges with games for this system, it works, but never really used it.

I have System 7 on floppies, it has a SCSI HDD and a 10 Mbit ethernet card. I also ahve mouse/keyboard for it, unfortunately it is failing. I think I need to recap it.

This machine has its own page!
Current service: DOS/Win3.11 retro playground/gaming.

The monolith was built in a big, lovely, beige, chieftech tower.

Current service: MAME cabinet This machine lasted me a long time, it recieved various upgrades over the years, I don't recall exactly what. Probably graphics card. It used 1.65 volt memory and at the time I started having trouble with only 4 GiB, it was high time for an upgrade anyway. After being in my service for some years, my mother used it for 2 or 3 years, I think.
When the machine in my MAME cabinet died, the guts of mono were transplanted, except the graphics card, as the ATi Radeon from the MAME cabinet fit, and has special drivers for outputting the 15khz singal required for the arcade CRT. So, mono lives on!

Current service: Workstation (Internet / Programming / Everything except gaming) This machine served me very well! * it was my primary and only PC until recently. I upgraded the GTX780 to an RTX2070 when it struggled with COD4. That meant I had a GTX780 doing no good, so I gave it to a friend who replaced his GTX750Ti with it, and in turn, I got the GTX750 as a surplus card.
When I built the gaming machine (bulkhead) I put the RTX card into that, and put my friends GTX750Ti into detail (since it's now a dedicated work machine, it does just fine with the less powerful card).

My newest machine, dedicated to gaming ONLY.

Current service:Gaming/Streaming only.
I built bulkhead because I had two sets of harddrives, one for Windows, for playing the games that I coulnd't get proper working in Linux, and one for Linux, with everyhting else, since Linux is the environment in which I'm most comfortable and prefer to spend my time. I got tired of swapping disks, and decided to get another box for gaming.

More to come some day

I had a lot of PC's but I can't remember them all.